Certainly, I Am With You (Pons, Cuba Update) 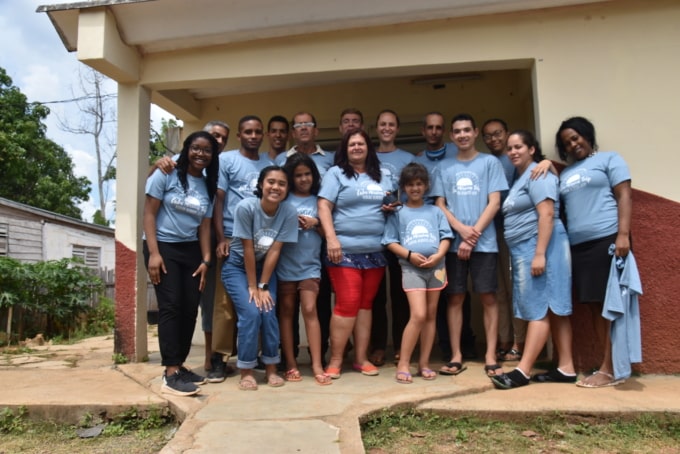 At 12:30pm we gathered together at the AC  to do last minute packing for mission trip. There was a mix of excitement as well as fear of the unknown. Would we forget something? Would we make it to the airport on time? Is everything ready? Are we ready?

Time came and went and before we knew it we were waving goodbye to our parents and loading up the vans. Forming a circle and huddling close we prayed together asking God to go with and before us. We got in the vans and off we were. A couple hours later we arrived at the San Francisco Airport. Rather slowly we checked in our bags. There were some complications due to some of the bags being overweight but by God’s grace it worked out in the end. By the time we went through the security check it was 6:50 pm. We split off into little groups and with the ten dollars provided to us we went in search of food.

Eventually the time we had all been waiting for came and so we dragged our heavy, overflowing  carry-ons to our gate and found our seats at the back of the plane (Jaycee said that sitting  at the back of the plane was better because  if we get in a plane crash we’ll be safer. I’m not sure if that’s true but I appreciate the thought). The plane took off right on time and just like that we were on our way to Panama City. We look forward to what God can and will do through us on this mission  trip as this is merely the very beginning and we know He has great things in store far beyond what we could ever imagine.

[ 3/25/19 ]
Two long flights later we arrived in Havana, Cuba. We were at once struck by the beauty of this island and the humidity none of us were ready for. A couple of people in our group had issues going through customs but in the end God made a way and we successfully  made it through every check and search. We were met by Christopher, a friendly missionary working with ASI, who prayed with us and informed us on Cuban culture. We spent that night at the World Youth Division located in Havana.

It’s crazy to think that a full two weeks has gone by. Fourteen days spent in door-to-door visitations with the locals, eating amazing food, watching dozens of younger boys eagerly play baseball, passing out Spanish GLOW tracts, joining the kids as they sing Alaba Dios (Praise God) at the top of their lungs, talking and laughing with our team of bible workers, presenting truth every evening to those who attended the meetings, and so much more. I’m quite certain that we’ll never forget the friends and memories we made there in Cuba. Sure we spoke two different languages and weren’t always able to understand each other, but by the end of the mission trip we became one big family in Christ.

We had our difficulties here and there but it was a growing process for all of us. For many of us it was our first time preaching and I know personally I didn’t feel prepared or that I was capable of ministering through preaching. It was at this time that I was reminded of Moses and his experience when God called him to go and speak before Pharaoh. Moses said “Who am I that I should go unto Pharaoh, and that I should bring forth the children of Israel out of Egypt” (Exodus 3:11). What really struck me was God’s response. God said unto Moses, “Certainly, I will be with thee” (Exodus 3:12a). God takes us as we are. It’s okay if we’re not the most eloquent public speaker to walk the face of the earth because God hasn’t left us to figure it out on our own, instead He takes us as we are and fulfills the work within us that we ourselves are not capable of doing. And He did just that these past two weeks.

We clearly saw the Lord work in great ways in just the small amount of time we were there. Though the work we were doing there in Pons seemed so small to us God was able to take what we did and use it to bring souls into the eternal kingdom. During our last week in Pons we visited a lady who had been coming to the evening meeting regularly. She had been receiving bible studies from the Bible workers there in Pons and the Lord had placed in her heart the desire to be baptized. The only problem was that she was struggling to surrender something in her life, jewelry. The day we had visited her we prayed for the Lord to give her strength to overcome her struggle and we continued to pray for her even after that. A few days later we bumped into her as we were doing visitations elsewhere and as we greeted her we noticed that she was no longer wearing jewelry. She seemed happier than ever and wanted to fully commit her life to Christ. Through this experience, and so many others like this one, we witnessed the power of prayer and saw how God was actively working in the heart of the people there in Pons. It was definitely a blessing for each one of us to have the opportunity to be co-labouraters together with God.