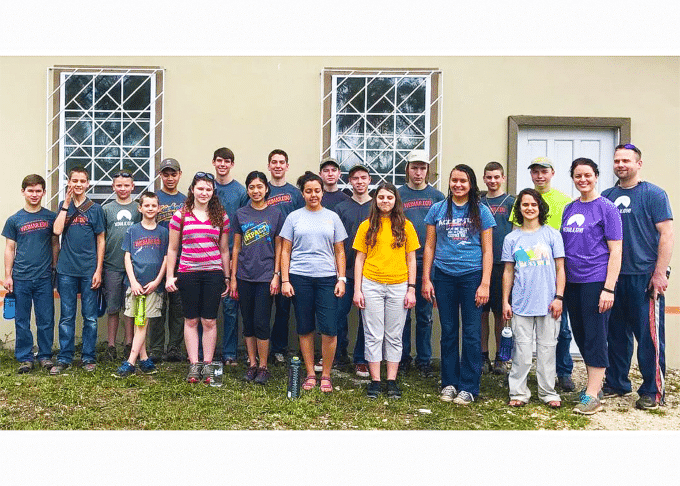 What is a missionary? I once heard a little kid answer question by saying, “Missionaries are people who live in Africa and teach people about Jesus and how to brush their teeth.” I chuckled at how the stereotypes had pervaded this child’s perception. But as I thought about it more, I began to realize that I myself didn’t really know what it meant to be a missionary! Of course I knew that they didn’t all live in Africa, but the question still remained: What does it really mean to be a missionary?

MOVE answered this question for us.
From the moment we exited the Belize City airport and piled our supplies into the vehicles, I knew we were in for a genuine experience. As our hair was flying everywhere, day turned quickly into dusk as we jumbled and bumped along the “highway”. Hours later, we popped into a clearing in the bush where we had our first glimpse of Missionary Outreach and Voluntary Evangelism training school. Before long we were all tucked under our covers, falling asleep to the singing of a million night creatures.

Our days were filled with stories of adventures with God. We worked along side with real missionaries who did much more than just teach kids about brushing their teeth. They knew what it was like to work hard for what seems like nothing in return, to follow God’s lead even when there was no money, no food, and no set road to follow. They knew what it was like to plead with God for the souls of the people they were working for. They knew how to laugh at trials and inconvenience. They knew how to have nothing and yet everything. We watched them give of themselves, cook for us, translate for our seminars, cut ceiling panels, dig out rocks from the field and build a new house. Always with a cheerful smile, they patiently showed us how to work hard and make do with what we had. What struck me most about these missionaries in Belize was their love for people and desire for them to know Jesus.

The last day of our trip we heard about a man who had a hurt eye. We weren’t exactly sure what the complication entailed, but since Dr. Quion was with us, we felt more comfortable. One of the missionaries, Keren, asked if we could squeeze in a visit to this man before we left for the airport. It took lots of driving around, asking for directions, and prayer to finally locate the family, but once we arrived at the correct location, we were eager to do what we could to solve the problem. As we entered the small shack, none of us were prepared for what we were about to see. After conversing with the man’s son-in-law, Dr. Quion asked for the bandage to be removed from the old man’s face. My jaw dropped as I realized how dire this situation really was! As the bandage peeled off, we realized that the man had no eye! Cancer had eaten out most of the right side of his face, leaving a softball-sized cavity. We realized very quickly, that there was nothing, nothing we could do. That is, nothing except pray. Though it seemed so very insignificant, we prayed anyways. As our voices lifted in song to the Great Physician who alone can heal, the man’s moans of pain quieted. He rested without a noise or complaint. I know he couldn’t understand our English words, but through our singing, he felt God’s hand on him, and he was at peace.

Being a missionary doesn’t mean you can solve the worlds hunger issues, provide a home for all the world’s orphans, have all the solutions, or know all the answers. So what is a missionary? There’s one thing I learned on this trip, and that was this: being a missionary is holding God’s hand and doing whatever He tells you to do, even if its just whispering a simple prayer or singing a heartfelt song.