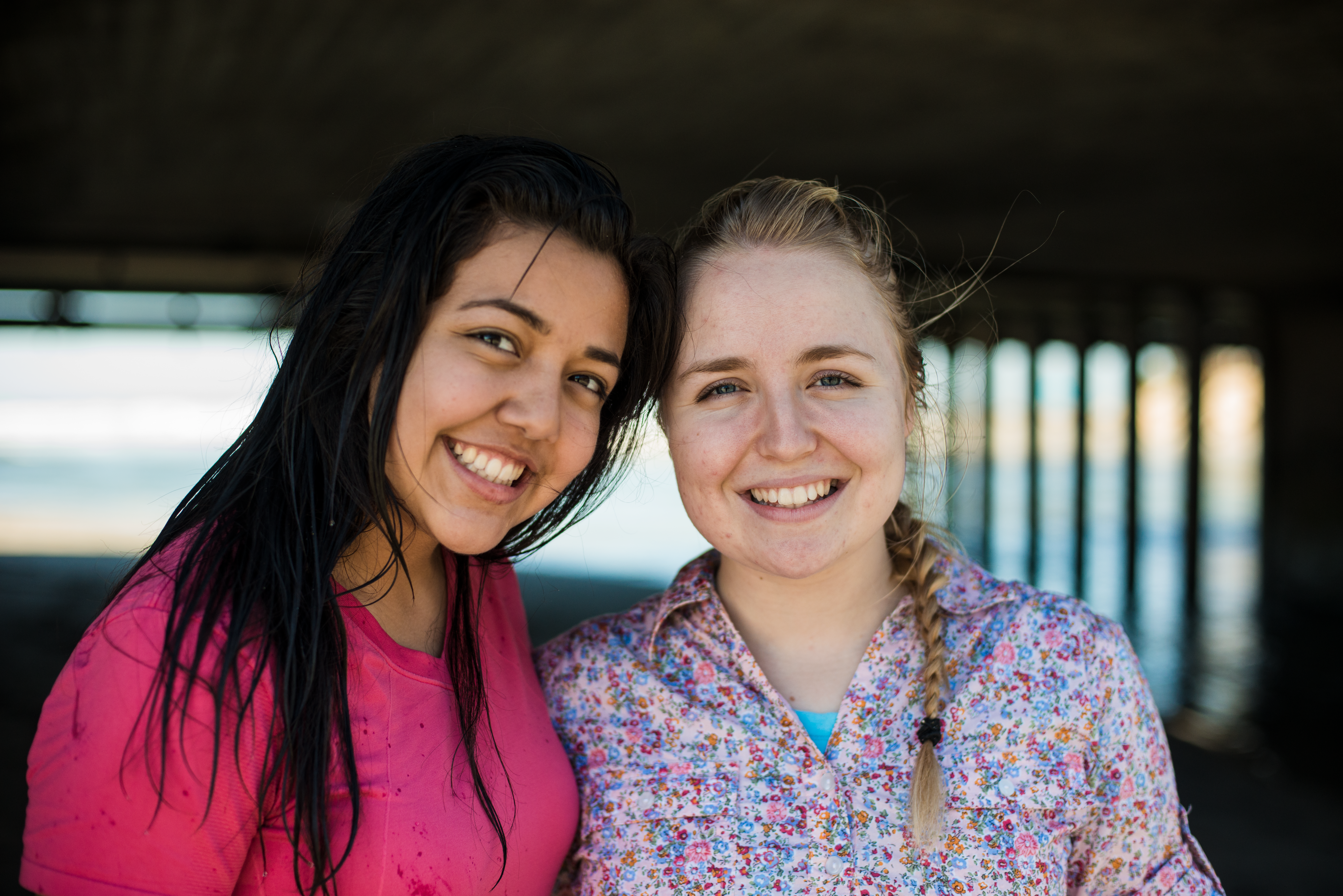 Our last morning at Fallbrook was pretty packed. I don’t really know about the others, but I found that church very confusing, even though it wasn’t that big. Most of us cleaned. I was charging a borrowed camera battery, so I sat on the floor beside the outlet for the 30 minutes I had left before I had board the bus. Our bus ride to the beach was gorgeous. I hadn’t been feeing so well, so i was a little down that I wouldn’t be able to swim. Once we arrived there everyone went running toward the ocean, but not even a minute later they got called back to Mackenzie for some rules. A surfer’s advisory had been sent out warning about the crazy waves, which meant we could only go waist deep. I wasn’t even planning on even getting in the water, so I went to the little lagoon that seemed more like a fast lazy river. (Just a little fyi the water was freezing.) A couple hours later I was feeling better, so i decided that I would take a dip in the water. We ate hot dogs for lunch. The seagulls came by and were bothering us getting too close to our food, so some of the boys would shoo them away once in a while.We stayed for a little while more, although most of us only had enough energy to bounce a ball around and make sand castles. A lot of people got red like a tomato. I got a little golden… but not much. I just have to say the winning award for a farmer’s tan went to Miguel. Boy did he get a farmer’s tan. So the fun had to end and it was time for us to go back to the bus. The bus came and we were gone, off to Orangewood academy.

Once we arrived, we had to wait a little while outside of the gym door, fiercely guarded by Ms. Tara. I wouldn’t have been able to get past her even if I had straight A’s in her class. Finally, she let us in, and we rushed in with all our luggage, pillows, and bags. I set up where I was going to sleep and rushed to the shower after 2 days of not showering and I think what made it a little worse was the sand that I had stuck on every single strand of me hair. Once I got out, fresh and cleaned up, I decided to sleep and started getting my bed ready, but I got distracted when Daniella turned on her flash light and Emily started to make shadow puppet things. It was funny because they pretty much knew how to do 2 things: the dog shadow and a heart. Once they decided it was enough they turned off the lights and everyone applauded. It was fun even though it didn’t have a story line. Finally after a long, tiring day of traveling, I got to sleep.

I got up, got my things together and placed them next to the bus, and changed into the khaki skirt and black weimar music polo. I searched for my garment bag like a ‘gallina decabesada’ (a chicken without a head) for about 10 minutes to find it on the floor right beneath the garment bag rack. I was looking for my flats, so I had to go to the restroom and wash my dirty feet that touched just about every single flat surface imaginable (cement, wood, bleachers, etc.). Then I went to go eat breakfast and tell Mackenzie what I was choosing for dinner. Some of us went to the music lounge that the academy had before we got called to worship. After Payton did worship we had 30 minutes to practice before the Orangewood students came to hear the 45 minute concert. Besides that fact that we had taken 3 songs from the concert, didn’t have a piano, were in a gym, and only had 1 speaker, we didn’t lose hope that God would do something great. We prayed that the students would be impacted by the words and music. I am still praying that at least one of them would be convicted and know that God loves them, but I know that satan was trying to make the worst out of everything. I’m positive that there was someone in the crowd that is going to do great things, but was distracted with the almost “non-hearable” piano and our shaky nervous voices. But I am sure that God left something good at Orangewood academy.

Once we left the school we went to a park where I got to talk to my mom after like… Thursday…last week… I’m such a horrible daughter. I was thinking about her everyday, so I’m good right?

There was a library and art gallery there, so some of us went up to the art gallery and a little Japanese tea garden. After a while the staff brought us food and we finished eating at the park then headed to the bus. We had an appointment to go to sing at a retirement center. It was really nice meeting Mackenzie’s, RD’s, and Bailey’s grandmother. She was so cute! ahh! She thought I was the director of the choir, so she was trying to get my attention and once she did I told her I was just a student. We were waiting for the trailer with the instruments, barricading the entrance in the process. With the arrival of the instruments, we filed inside, unloaded, and attempted to line up in the correct order. Sound mind sang, and the choir and orchestra attempted to get by without both piano and percussion. After personal prayers with the residents, singing “The Lord Bless You and Keep You”, and a stampede for the refreshments, we went back out to the parking lot to wait for the bus and take pictures with Grandma Gallant.Finally, after waiting about 10 minutes (that almost seemed like an hour) and hearing many “El Guapo the third” stories from Jack, the bus arrived and we started loading up. We were headed off to Templeton SDA Church. A lot of fun little things happen during the bus ride like drawing a banner for Jack that goes with his crazy stories and hearing a recording of us singing to having conversations about relationships to stopping at a rest stop and getting scolded my mr.chad and mr.mike for buying junk food at the vending machines. I would write every single detail, but that would take up at least another whole page and my body is screaming for some nap time. Over all, these 2 past days have been full of little exciting adventures.